Home » A Brief History of Florence

The history of Florence is a deep one that goes back thousands of years. Here we will give you a brief insight of how Florence came to be. You will come to know what was happening here during the Florence Middle Ages and of course, the Florence Renaissance, the period in which Florence is best known for. 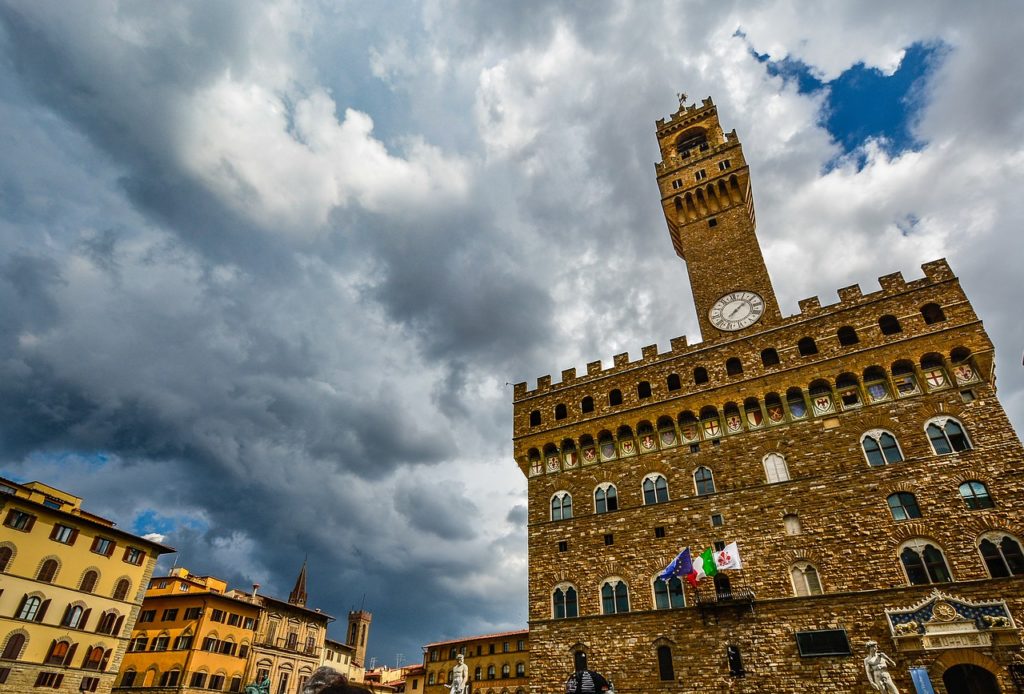 The Etruscans, a rich and advanced people of uncertain origin living in Central Italy, created a small outpost in the hills of modern Fiesole a few centuries before the arrival of the Romans from the South.

At that time the Arno valley was a big and unhealthy swamp, definitely not suited for human settlement. History suddenly broke into the region in 218 BC when Hannibal, the great enemy of Rome, invaded Italy and passed through the valley with the Carthaginian army.

His soldiers were killed by diseases and he even lost an eye, but no Roman army dared to follow him into the dangerous swamps, so he was able to continue, unchecked, towards his dreams of conquest. But in the end modern Tuscany, in Latin Etruria, was definitively subjugated and latinized by Rome during the 2nd century BC, even if the Etruscans had a great and lasting influence on the Roman civilization.

The official history of Florence begins in the year 63 BC: during a civil war Lucius Sergius Catilina, an ambitious nobleman, tried to seize supreme power, but his rebel army was defeated near Pistoia. Faesulae (the modern Fiesole, which had supported Catilina) was subsequently destroyed and the survivors forcibly moved from the hill to the valley where the Romans had just established a fortified village, Florentia.

In this way they became the first inhabitants of Florence, but not the only ones as some retired Roman soldiers also settled there with their families. But why Florentia? (from the original Latin name come all of the modern foreign versions of the name of the city: Florence, Florencia, Florenz, Florencija...).

Perhaps it was because the legendary founder of Florence was the centurion Fiorinus, but it’s unlikely. In Latin, Florentia can mean “city of flowers” or “blossoming town”, however the new village, situated along important roads and in a fertile valley (the Romans had dried the swamps,) quickly grew and flourished and enjoyed the prosperity of the Roman empire in the following centuries, until the coming of the barbarians!

Florentia survived the barbarian invasions and the fall of the Empire, but only after 1000 AD was it able to recover from the decadence of the early centuries of the Middle Ages or Medieval Florence.

The city regained its economic importance and its autonomy through the feudal lords of Tuscany. Florence was one of the many and glorious “comuni” (free cities or city-state) of Italy and able to choose its own institutions and leaders, even if it always continued to swear its allegiance to the Holy Roman Empire and to the Papacy.

In this period, part of the Florence Middle Ages,  the noblest and wealthiest families competed for the town leadership and were divided by bitter personal and political contrasts. Since the 13th century the main rift was between the supporters of the Papacy (Guelfi - Guelphs) and of the Empire (Ghibellini - Ghibelines); for decades Florence was torn apart by civil wars until the strongest Ghibellini families were defeated and exiled (their palaces were destroyed in the place where modern-day Piazza della Signoria is). But quite soon the Guelfi themselves split into two warring factions and the domestic struggles went on.

In the meantime, the city became richer and more populated and fought neighboring towns for control of Tuscany: the toughest enemies were Arezzo, Pistoia, Pisa on the coast and above all Siena. Florence was overwhelmingly ‘Guelfa’ while these rival towns were mainly ‘Ghibelline’, so they supported the Ghibellini partisans within Florence.

In 1260, after the big defeat of Montaperti, Florence faced destruction but at the end succeeded in destroying the power of Siena. In 1289 Arezzo was also conquered in a battle at Campaldino, in which the famous Dante Alighieri fought.

Dante was a poet and a writer and took part passionately in the political life of the city until his faction was defeated and he was exiled from Florence. In his masterpiece, ‘The Divine Comedy’, we find many characters, events and feuds of these dangerous times.

It was an age of conflicts not only outside, but also within the city: between original citizens and families immigrating from the countryside (the notorious ‘contado’); between nobles and traders; between rich and poor; between employers and employees (for instance during the ‘tumulto dei Ciompi’ in 1378). In the meantime a powerful and clever family of bankers were increasing its power and wealth until they became the effective rulers of Firenze in 1434: The Medici. It was, however, also the during all of the this that the Florence Renaissance has begun.

The most important member of this famous dynasty was ‘Lorenzo il Magnifico’ who ruled Tuscany for half a century and was the first Italian prince of his age: the age of the Renaissance which he made blossom.

He was a great diplomat and kept the Italian states in peace and the peninsula free and independent. His reign was popular, but after his death in 1492 the Medici’s enemies arose against his successor. Girolamo Savonarola, a strict and zealous Dominican monk, tried to moralize the habits of the citizens and to keep the influence of the corrupt Papacy out of Florence (in this period the medieval name Fiorenza began to be replaced by the modern name ‘Firenze’).

After many clashes he was imprisoned and executed in 1498 in the Piazza della Signoria. So the Medici returned, but then were expelled again and Florence became a republic that was involved in the bloody wars between the French and the Spanish who both wanted to seize control of Italy. Cesare Borgia, a daring and violent prince and son of a corrupt Pope, tried to conquer the town, but failed.

The famous Niccolò Machiavelli used him as inspiration for his influential work 'Il Principe' (The Prince). After years of conflict Florence was besieged by the mighty army of Charles V of Spain in 1530.

The great artist Michelangelo built new kinds of defenses for the fortresses, but to little aid and the city was forced to surrender, allowing the Medici could return and again seize absolute power. Cosimo was the new duke, a clever and intelligent prince, a loyal ally of Spain, but not a puppet.

In 1555 he finally conquered the secular enemy of Florence, Siena, and he became the first ‘Granduca di Toscana’. In the following two centuries the city lived in peace and prosperity until the last of the Medici died without heirs in 1737. The new rulers were the Lorena family, of Austrian origin. Under the influence of the Age of Enlightenment they issued many reforms and forbade torture. In 1785 Tuscany was the first state to abolish the death penalty.

After the French Revolution Florence spent 15 years under the Napoleonic rule, was involved in wars and rebellions and was even annexed for a while to France! With the Restoration movement the Lorena returned as well, but times were changing swiftly... many people from all over the country began to struggle for an independent and united Italy and also in Florence there were many patriots.

During the First War for Independence many students and teachers from the universities of Florence, Siena and Pisa fought and lost their lives (the battles of Curtatone and Montanara). In 1859 the Lorena were peacefully but definitively expelled and Florence joined the newly-born kingdom of Italy. In 1865 the capital was moved from Torino to Florence until the liberation of Rome in 1870. In those years the medieval walls were torn down and the city grew larger and more industrialized.

After the gloomy years of the First World War in Florence there were many riots and clashes between Fascists and Antifascists (mainly Communists) and during the Second World War, Florence was occupied by the German troops for one year. Luckily the city was not heavily damaged, but all the historical bridges on the Arno (except for the ‘Ponte Vecchio’) were destroyed.

After the war Florence and its surrounding province became one of the richest and most advanced areas in Italy and began to attract thousands of tourists from all over the world. In 1966 there was, unexpectedly, a great disaster: a terrible flood of the Arno inundated the city center and heavily damaged the artistic treasures of Firenze. But the work of many people, Florentines and volunteers from outside, saved one of the most beautiful cities in the world.

Florence was a daughter of Rome, this is not only a medieval myth. The Roman Colony ‘Florentia’ was founded around 59 B.C. and fortified like all the other settlements of the northern part of the Arno valley connected to the ancient via Cassia.
continue

Starting from the beginning of 12th century this walls were no longer sufficient. The extra-walls villages became greater and crowded, they took name from the churches or monasteries that rose at their extremities: Borgo San Lorenzo, along the via Cassia toward the great Ambrosian Basilica; Borgo di Balla toward the countryside of Cafaggio; Borgo di San Remigio, at east to the church with this name; Borgo di San Piero (along the today Borgo degli Albizi) to the monastery of S.Pier Maggiore; Borgo di Campo Corbolini to west. Also across the Arno rose many villages.
continue

During a period of peace between the city factions and guilds was begun the great new walled enclosure. Was the year 1284 when the walls were planned with the consultant of the architect Arnolfo di Cambio. The real works started only in 1298 and proceeded slowly and irregularly.
continue

Let me take you again at the beginning of the story... The first settlement on this bank, that is called ‘Oltrarno’, developed early in Roman age, along the Cassia Nova at the cross where converged the main roads coming from Pisa and Volterra, on the southern extremity (caput Pontis) of the bridge later called ‘Ponte Vecchio’.
continue

Here you are in one of the most beautiful squares of Florence. Beautiful? I mean, splendiferous! Anything you want, we've got it. It's a busy, active piazza full of life and with all sorts of things going on under the wing of the glorious Basilica which has been looking out over the whole square, its surrounding streets, its stands, its residents and its visitors since 393. The market and its stands have been around since the 1400s at least, but itinerant merchants may have been coming here even earlier.

How old is Florence?

Based on the most popular version of the history of Florence, the city was founded in 59 BC, putting it at about 2077 years old.

What is Florence, Italy best known for?

Florence, Italy is known for so many things that have the changed the world that we live in today.
So what Florence is famous for? Florence is known for its art, as being the cradle of the Renaissance, its famous former residents such as Michelangelo, Dante and Da Vinci and of course its famous sites such as the Ponte Vecchio and the Duomo.

What are three reasons why the Renaissance began in Italy?

Why did Florence become the birthplace of the Renaissance?

Mainly for the reasons that you see above, but to expand and specify a bit, famous writers and artists sprung from this city during this time and it was the center of European trade, mainly focusing on wool.