Home » An Insider Guide to Lisbon: Your Way through the City of Light » Lisbon parishes and districts: a map of the city

How to find the best neighborhoods in Lisbon to live in

If you are a student looking to move to Lisbon to study for a while, you could be confused by the maze of attractions and by the names and number of different districts.
So, first things first: let’s understand how lovely Lisboa is actually structured and then go from there!

What are “freguesias”, in Lisbon?

The Portuguese word “freguesia” defines an administrative subdivision of a municipality. “Civil parish” is the most commonly used, and intuitive, word for “freguesia” in English.
Up until 2012, the Lisbon municipality comprised a total of 53 freguesias, today it counts 24. These are:

Take a look at the map of Lisbon’s freguesias and neighborhoods below.

Each freguesia includes at least one, but generally at least two or three, neighborhoods. In Lisbon, neighborhoods are called bairros or bairros de Lisboa, and they are not defined by physical borders of any kind. Quite a lot of Lisbon’s neighborhoods have very ancient origins, and the people who live there still share a common lifestyle, just as their streets and alleys, and landmarks still share a common type of architecture and heritage. The added value? Each Lisbon neighborhood, and consequently each freguesia, has a distinctive and unique character, and each is different from the others.

Let’s look at a few examples: see details about some of Lisbon’s most attractive areas.

Why is Campo Grande in Lisboa so popular and renowned among students? For the same reason why it’s always bustling with life and energy: because Lisbon’s most extensive and vital university campus, the Cidade Universitária, is right there, in Campo Grande! Alongside study halls, classrooms and libraries, Campo Grande Lisboa also offers a lot of relaxing greenery, and all the services and facilities students need, from cafès and eateries to banks and pharmacies. Transport facilities are great too: you can take the subway or bus to anywhere in town. As for housing opportunities, students can also consider staying in Estrela, Lisbon: verdant and tranquil, it offers its inhabitants the chance to enjoy many pleasant hours in its beautiful park, the Parque de Estrela.

If you want to see what universities are in Lisbon, check out this page.

Chiado, Lisbon, is among the city’s most ancient neighborhoods, and a truly enchanting place both to visit and live in because it is resonant with history and culture. Chiado, Lisbon, is where the great Portuguese writers Fernando Pessoa and Eça de Queiroz spent their afternoons chatting, working, and exchanging views. Those who are familiar with Paris sometimes speak about this area as “Lisbon’s Montmartre”. Intriguing period cafès, bohemian allure, and rich and diverse cultural legacy are indeed reminiscent of the French capital’s seductive hilltop neighborhood! The distinctive aura of Chiado is similar to those of the party-committed Lisbon Bairro Alto district, but a bit more demure and fascinating. It comes as no surprise that apartments for rent in Chiado Lisbon are so popular among young people and tourists alike!

Arroios, in Lisbon – at once typical and cosmopolitan

“Live in Arroios, Lisbon, and you’ll feel like a local, not like a foreigner”. That’s what many say, and it’s probably true because Arroios houses people from all over the world! Lisbon is renowned for being multi-cultural and multi-national: this neighborhood, with its typical architecture enhanced by restaurants and shops broadcasting the cuisine and goods of 70+ countries around the globe, perfectly embodies its cosmopolitan soul! Plus, the Saldanha, Anjos, and Intendente neighborhoods in Arroios, Lisbon, are the most budget-friendly in town!

Some students and young professionals prefer staying in quiet, less bustling surroundings. Well, if you’re looking for a tranquil neighborhood, but don’t want to miss out on Portuguese tradition and a typical atmosphere you may want to consider Belém, a charming historic neighborhood. Rising west of the main city center on the northern shore of the Tagus river, Belém is the birthplace of the local pastel de nata tart and hosts stunning museums, art galleries, and plenty of green areas.
Transport inside the Belém freguesia is via tram, you can travel across the river by ferry boat, and some trains and buses connect it to the main city center.

Oeiras: a location closer to the ocean

Looking for seafront accommodation? Check out Oeiras, a pretty upscale neighborhood. Located more or less halfway between central Lisbon and Cascais, Oeiras is close to the river and the ocean. In Oeiras you will enjoy three nice beaches: Praia da Torre, Praia de Santo Amaro, and Praia de Paço de Arcos. If you live in Oeiras, traveling into central Lisbon will take you approximately 25 minutes by car, or 50 minutes by public transport.

These five parishes prove that lovely Lisboa has something for everyone!

Transport in the Portuguese Capital: Subway

Like any other international city worth its salt, Lisbon has a well-functioning subway that connects the main city’s areas.
You can see a comprehensive map of the Lisbon metro line below. As you’ll note, the Lisbon metro comprises 4 main lines.

History and heritage: an overview of Lisbon’s historic neighborhoods

Lisbon carries a centuries-old historical legacy that sets it apart from many other European cities. A lot of this heritage can be seen, appreciated, and experienced firsthand in its historical neighborhoods

The most picturesque and ancient are: Alfama, Bairro Alto, Baixa and Belém.

The origins of Lisbon’s most ancient neighborhood are lost in the mists of time. Founded by the Romans, it was a fisherman’s village under their rule and when it became part of the Visigothic Kingdom. Its name says a lot: “Alfama” derives from “al-ḥamma”, an Arabic term that means “hot fountains” or “baths” (similarly to the word “hammam”), and was probably given to the area by the Moors when they conquered it back in 711. Alfama miraculously survived the dramatic earthquake of 1755: this is why it still retains its beautiful period architecture.

Literally “high, or hilltop, neighborhood”. Arguably Lisbon’s most picturesque area, Bairro Alto is quite recent as historical neighborhoods go. It was planned and built starting in 1513, to respond to the needs of a swiftly developing city by accommodating its merchants and the new homes of the aristocracy. The neighborhood’s destiny started changing in the 1800s when newspaper headquarters rose within its winding streets. Bars and brothels followed, and that was the beginning of the area’s bohemian reputation. Although untouched by the 1755 earthquake, the neighborhood was partially restored between 1760 and 1780.

Literally “low”, i.e. “downtown”. Baixa is also known as Baixa Pombalina from Sebastião José de Carvalho e Melo, the 1st Marquis of Pombal. He reconstructed the city after the 1755 earthquake. The grid pattern of the area and the actual architectural features such as the “Pombalina cage” that we see today are among the world’s most remarkable examples of an earthquake-resistant urban center.

Archeological remnants found by the Tagus river show that humans may have inhabited the area called Belém as far back as the Neolithic era. This part of Lisbon played a leading role in the Discovery Era, that exciting historical period during which the world’s great explorers set off from Spain, Portugal, Holland, and England, to discover new lands.
In 1497, Vasco de Gama departed the banks of the Tagus river looking for a route to the Indies. To celebrate his success, 2 years later King Manuel I built the outstanding Jerónimos Monastery. The Tower of Belém, another amazing landmark, also dates back to the same period. 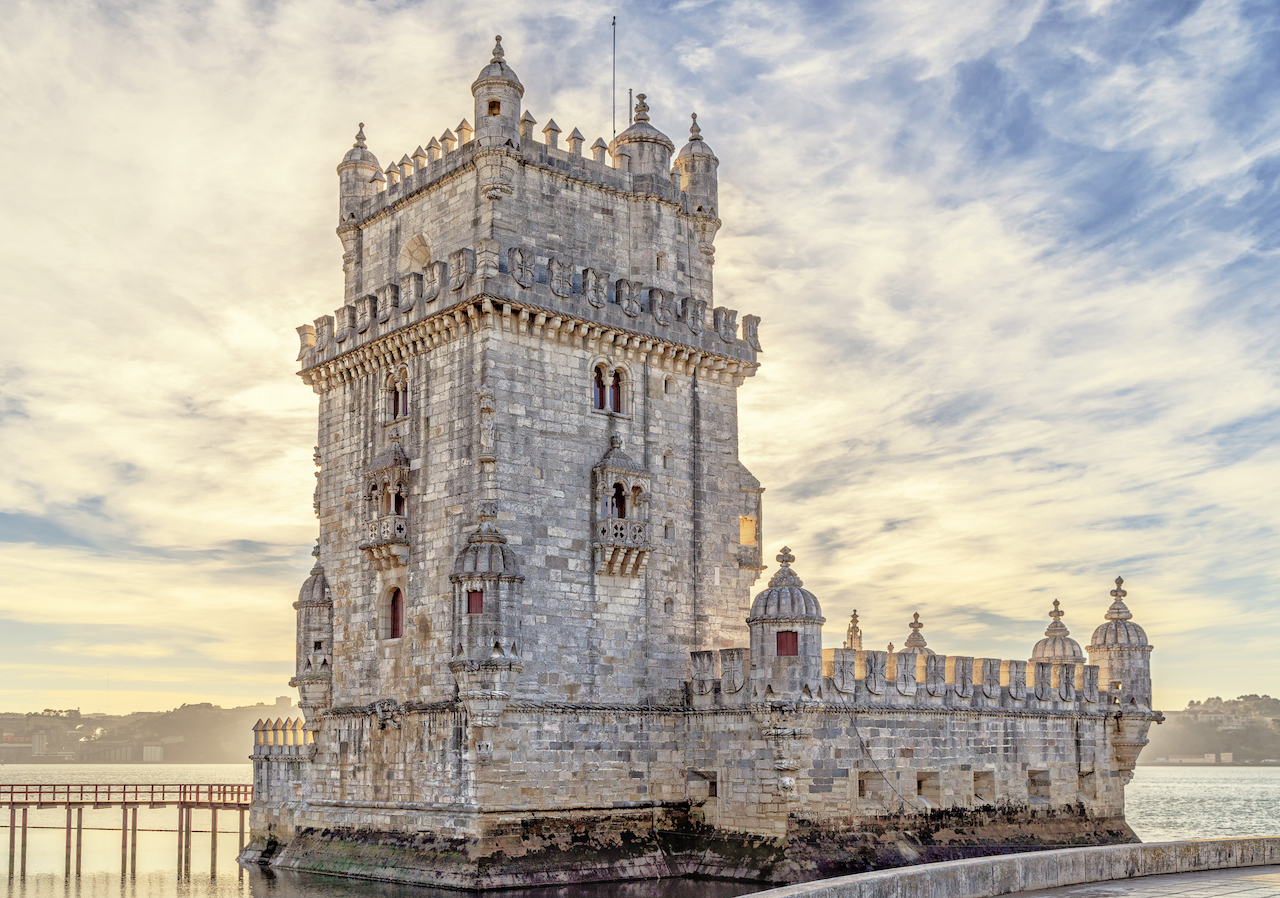 Neighborhoods to avoid in Lisbon

Lisbon is a generally safe city and, as reported by the European Safety Observatory, one of the safest capital cities in Europe. But, just like all major cities and popular tourist destinations in the world, it has its share of crime. This also means that there are some areas you’ll want to avoid. The neighborhoods with the poorest reputation in Lisbon are Rossio-Martim Moniz and Mouraria. Located in the northern part of the Santa Maria Maior freguesia, both are somewhat seedy and rundown. This is basically because they are left to their own devices, and so poverty, drug dealing, and social exclusion thrive. However, rest assured that Lisbon’s police department is very alert and present: there are a lot of policemen doing rounds everywhere, especially in the nightlife and touristic areas of the rest of the city.

Where to stay in Lisbon? The most student-friendly neighborhoods

Choosing the right neighborhood to live in while you study in Lisbon is very important. The wonderful thing about Lisbon is that all the most popular areas offer good enough transport and a lot of charm, so this choice mainly depends on your preferences.
Some neighborhoods in Lisbon are more sought-after by students.
These are:

Slightly outside the hustle and bustle of central Lisbon, but well-connected with the university area and nightlife hubs. These three neighborhoods are a smart choice if you like living in quiet surroundings. Added value: all three border the Jardim Alameda Dom Afonso Henriques, one of Lisbon’s most beautiful public parks.

Trendy is the word. Students love these areas for their distinctive ambiance, cool bars, and overall hip atmosphere, and Time Out awarded Arroios “the coolest neighborhood in the world” title in 2020. Plus, they’re served by the green metro line, which allows for easy and quick transport to Carcavelos beach!

Santos is one of the most ancient and evocative neighborhoods in Lisbon. With fascinating period buildings, quaint shops, art galleries, and pretty cafés lining the old streets, and hardly any traffic, it’s a great place for a student to live. If you’re crazy about the ocean, you can easily take daily swims while studying in Lisbon, provided you choose to live in Santo or the adjacent Bica and Alcantara neighborhoods: just jump on a local train and travel to Cascais and Caparica!

Another ancient, picturesque neighborhood where you can bask in old-world charm whilst studying in Lisbon. Rising atop the city’s highest hill, it offers lovely vistas, welcoming cafés and restaurants, buildings decorated with the typical tiles, and a famous flea market to browse for bric-a-brac. Students who choose to live here speak highly of the village-like life, socialize with their local neighbors, and get into town or classes easily on foot, by bus, or aboard the famous tram n.28.

Outside the center, but very attractive for all students who enjoy having spacious green areas close to home to engage in outdoor activities. Renowned for its namesake soccer stadium, the neighborhood offers quick access to the Monsanto Forest Park. This place is perfect for cycling, walking, running, or just relaxing among the greenery. And the metro easily takes you anywhere you need to go!

Boasting chic restaurants, alongside theaters and cafès, Chiado is very popular with tourists and is considered one of the city’s “fanciest” districts. The metro, tram, and bus lines allow for easy transportation.

Do you want to move to Lisbon? Find here how to do it.