The ancient Florence in Italy...Florence was a daughter of Rome, this is not only a medieval myth. The Roman Colony ‘Florentia’ was founded around 59 B.C. and fortified like all the other settlements of the northern part of the Arno valley connected to the ancient Via Cassia.

The life of Florentia started as quadrangular castrum, its walls were divided by the cross formed by the two main streets: the cardo running north-south and the decumano running east-west. [The cross point of these roads was between the actual Via degli Speziali and Via Roma]. 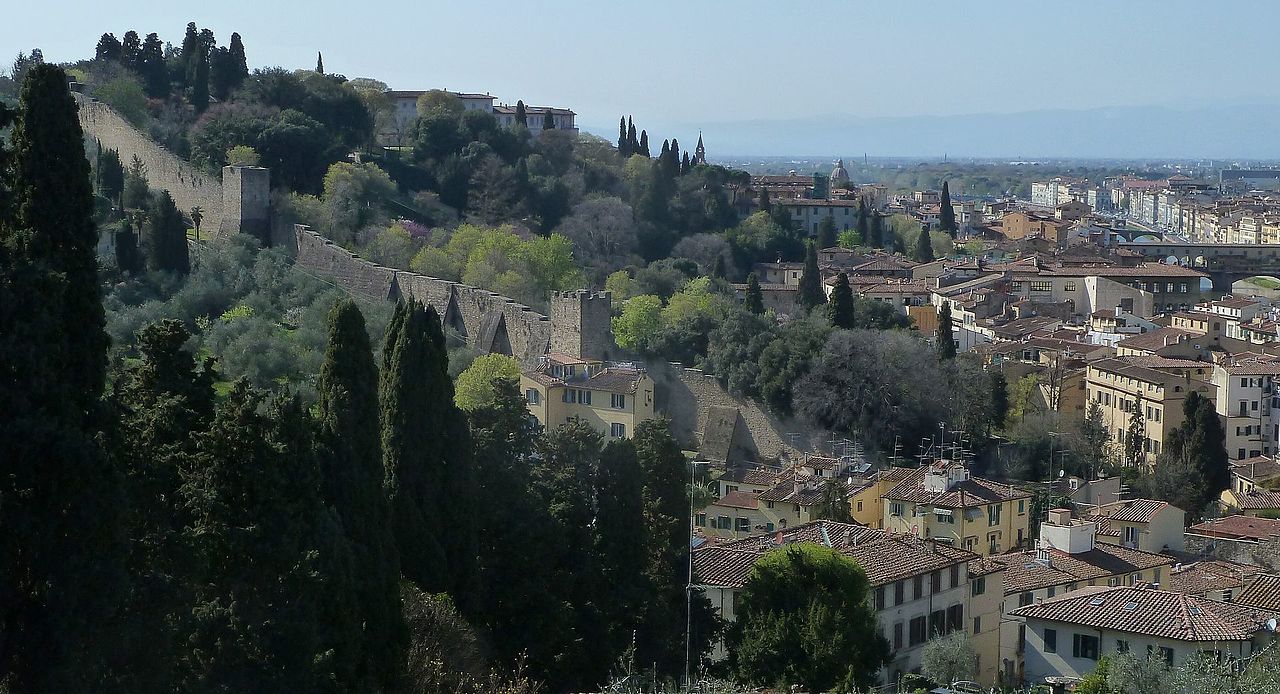 The main purpose of Florentia was to defend fords across the river Arno. Here, at the end of 2nd century A.D., was erected a wooden bridge on stone piles, later rebuilt completely in stone. Still, today is easy to read, on every modern map, the ancient Roman perimeter: it stretched for 1.800 meters, 450 meters for each side, and was enclosed by walls built in brick interspaced with towers.

How were ancient walls built?

The walls were built of solid brick, on concrete foundations with an average thickness of two metres and with internal reinforcements consisting of special frames.

Where the two axial roads left the town were four gates. Each flanked by two cylindrical towers. The North Gate (or Roman Gate) was on the present-day Via Roma [the ancient Via Cassia] where it crosses Via Cerretani, the walls changed direction, to the north, with an angle of 90° half away along the present Via de’ Banchi followed the Via Tornabuoni (in this point the river Mugnone, later deviated, acts as ditch); here, at the crossroad between Via Strozzi, was the West Gate. North to Ponte Santa Trinita, the walls turned again to the east toward Piazza San Firenze, on this side was opened the Decumano Gate (at the beginning of the Via Vacchereccia).

The last side followed Via del Proconsolo and its gate was at the level of Via del Corso (after the recent work of block paving its shape has been marked on the road surface and is now clearly visible).

The little hamlet began to grow since the 1st century A.D. there were villages inhabited beyond the walls, along the Cassia Road. The city became bigger and richer up until the 5th century when it was besieged by the Goths. The decline was complete after the Greco-Gothic war when Florentia was razed to the ground.

The re-founded Byzantine town was again no more than a castrum, later with the Longobards the Cassia fell to decay; the main road linking to Rome was shifted to the west, in the Val d’Elsa, de-centralizing Florentia.

New walls, using ruins and abandoned materials, were built in part adapted to the old enclosure and in part using as support buildings and monuments of the Roman city. The walls were smaller than the previous ones, enough to contain the few inhabitants (no more than 1.000), the area of Roman Gate was now outside the walls.

How big is the city of Florence?

During the Carolingian Era, the city improved rapidly. In 825 Florence was one of the eight Italian cities designated as the seat of ecclesiastical schools by the Imperial authorities.

During the 9th century the population reaches 2.500 units, the territorial expansion was one of the Roman eras and the city even expanded to the southern bank of the Arno.

The Eastern, Byzantine, and Western, Roman, line of the city walls were restored, on the south, the walls were rebuilt to include the villages which had developed near the river. This new line ran along the Arno, on the nowadays Borgo SS.Apostoli, Via Lambertesca, the disappeared Castello d’Altafonte, Via de’ Castellani and Via de’ Leoni to meet again the ancient enclosure.

It's not clear what happened to the northern front of the walls, maybe these followed the Byzantine line but it's also possible that non-documented, inclusion of Santa Reparata (Piazza del Duomo).

In the 9th century, the city rapidly grew and the river port regained a great importance. At the mid-century it was [generously] estimated a population of 20.000 inhabitants. In this time of great demographic, political and social awakening the Countess Matilda di Canossa, fearing an Imperial siege, extended the town walls to include her extramural Palatium, reoccupying the area of the Roman Gate.

This new walls joined the Castello d’Altafonte, situated on the river defense of the port. Reinforced, in 1082 Florence withstand for 10 days the siege of Henry 4th.

What are the iron rings on buildings in Florence?

Since the Middle Ages the most important buildings in Florence were built using pietraforte.
The rings on the facades were used to bind animals, candles were placed in the nails to illuminate the street and hooks on the windows were used to hang curtains during festivities and religious ceremonies.

At this time we can stop the first part of the history: the Roman enclosure, enriched by Byzantine and Carolingian expansions and by the last of Matilde constitutes the ‘ancient enclosure’ with less than one kilometer between each gate. These were also known separately as the first, second, third and fourth city enclosure.