Rome monuments are known throughout the world by all and visited by many, every single day. I would even be so bold as to say that at least one rome monument is definitely on most people’s “bucket lists.” There are plenty of monuments in Rome to check out.

How many days should you spend in Rome? If you give yourself enough time you just might be able to see everything you want: all the monuments (it’ll be worth it). Together we will find answers to all the questions you might have, questions like, “How far is the Pantheon from the Trevi Fountain?”

Below we have listed the famous monuments in Rome, Italy to browse. Remember, most of the monuments and sites do not require an entrance ticket, however, they get crowded, so to get the best version of these monuments, it’s best to go early in the morning or late at night. 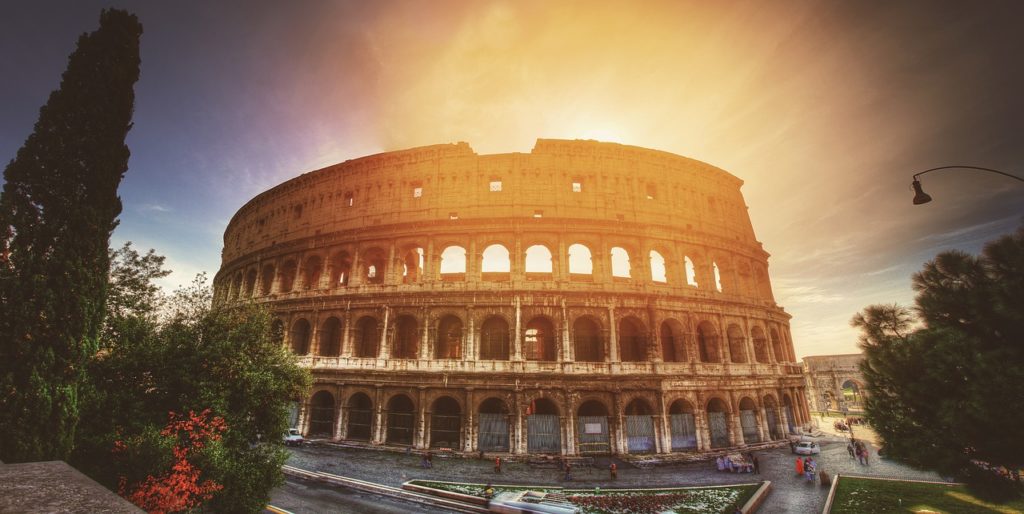 Things you must do when in Rome

What must you do in Rome?
You can’t say you’ve been to Rome unless…

What can you do in Rome for free?: Top 5 Sights in town

There are many free things to do in Rome…

Villa Borghese Gardens: Villa Borghese is the third largest public park in Rome.
It covers about 80 hectares and occupies most of the Pinciano district and a small part of the Campo Marzio district. The access to gardens is free of charge.

Pantheon: Pantheon (in ancient Greek: Πάνθεον [ἱερόν], Pántheon [hierón], “[temple] of all gods”), in classical Latin Pantheum, is a building of ancient Rome located in the Pigna district in the historic center, built as a temple dedicated to all past, present and future gods. The access is free of charge.
By the way Pantheon is also close to Trevi Fountain, just seven minutes walk away.

Church of St. Ignatius of Loyola at Campus Martius: The church of Sant’Ignazio di Loyola, overlooking the square dedicated to the saint, between Via del Corso and Piazza del Pantheon, houses a jewel: the magnificent fresco of the Glory of St. Ignatius with its incredible play of perspective. The access is free of charge.

San Pietro in Vincoli: one of the most venerated minor basilicas in the capital. It has a very ancient origin but its present appearance dates back to the last years of the 15th century. You can admire Michelangelo’s Moses, a work of art of incomparable expressiveness and beauty. The access is free of charge.

Sant’Agostino: It is one of the first Roman churches built in the Renaissance and houses the Madonna di Loreto, also known as Madonna del Pellegrini, one of the most famous masterpieces of Caravaggio who donated the work to the church as thanks for the kindergarten granted. The access is free of charge.

What should I do on my last day in Rome?

On your last day in Rome don’t forget to…

Anyway, Studentsville’s Staff has selected the best monuments to visit in Rome. Don’t miss them.

Monuments in Rome to visit: 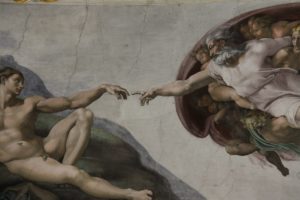 The Sistine Chapel – The chapel of the Apostolic Palace that was restored from 1477 and 1480 and renamed after the Pope Sixtus IV della Rovere. Most famous for “The Last Judgement” created by Michelangelo, among the other 9 main panels displaying the Stories of Genesis.

The Sistine Chapel is a chapel in the Apostolic Palace, the official residence of the pope, in Vatican City.

It is known throughout the world both for being the place where the conclave and other official ceremonies of the Pope are held (in the past also some papal coronations), and for being decorated with one of the most famous and celebrated works of art of Western artistic civilization, the frescoes by Michelangelo Buonarroti, which cover the vault (1508-1512 ca.) and the back wall (of the Last Judgement) above the altar (1535-1541 ca.).

How do you get to the Sistine Chapel?

– From Leonardo da Vinci Airport (Fiumicino): Take the Leonardo Express train to Termini Station and from there follow the Metro directions.

– From Ciampino Airport: Take the Terravision bus to Termini Station and from there follow the Metro directions. The taxi ride from both airports takes about 40 minutes.

– Taxi Station: Viale Vaticano, in front of the museum entrance.

– Car: Payment parks in Viale Vaticano and in the neighborhood. 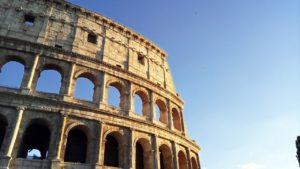 Colosseum – The largest amphitheater ever constructed during the years 72AD-80AD; used for gladiatorial contests and other public spectacles. Partially ruined by an earthquake, this still remains one of the focal points of Rome and is one of the most popular tourist destinations. The entrance ticket to the Colosseum, which also includes the Palatine Hill and the Roman Forum, costs 12 euros for the whole ticket and 7.50 euros the reduced price reserved for European citizens aged between 18 and 25 years. Remember, Colosseum is near Trevi Fountain, the distance between Colosseum and Trevi Fountain is 1 km.

Roman Forum – It is an archaeological area of Rome enclosed between the Palatine Hill, the Capitol, Via dei Fori Imperiali and the Colosseum (one minute walk), consisting of the stratification of the remains of those buildings and monuments of heterogeneous eras that for much of the ancient history of Rome represented the heart of the city of Rome, as well as the nerve center of the entire Roman civilization. 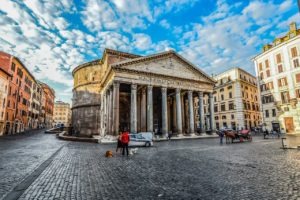 Pantheon – “Of, relating to, or common among all the gods” A temple to the Gods of Ancient Rome. Currently a Roman Catholic Church that still remains the world’s largest unreinforced dome made of concrete and one of the best preserved buildings in Rome. Burial site of painter Raphael and architect, Peruzzi, among others. 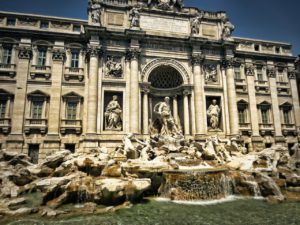 Trevi Fountain – One of the most famous fountains in the world at the center point of three roads (Tre vie) in Rome. Built at the end of an aqueduct, this fountain is one of the oldest water sources in the city.
But what is the Trevi fountain famous for?
Trevi Fountain is famous for the “legend of the coin”: if you throw a coin into the fountain by placing your right hand on your left shoulder, your return to Rome is guaranteed.

Theatre of Marcellus – ancient open air theatre showing nights of drama and song, that was started by Caesar and completed in 13BC by Augustus whom dedicated it to his nephew Marcus Claudius Marcellus. At the time it was the largest theater in Rome and used for more than 400 years. 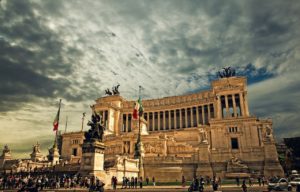 The Victorian – or Altare della Patria – erected on Capitoline Hill as a symbol of the city’s greatness. Built to commemorate the unification of Italy as one nation. Walk up (do not sit on!) the 196 steps to reach the Tomb of the Unknown Soldier. 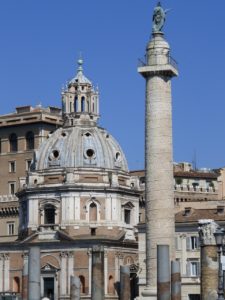 Trajan’s Column – A Roman triumphal column commemorating emperor Trajan’s victory in the Dacian wars that was completed in AD 113. Located to the left of The Victorian (see above) you will encounter this 98 ft. tall column that is part of Trajan’s Forum that displays the war between the Romans and the Dacians spiraling up to the top. 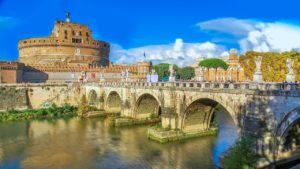 Castel Sant’Angelo – built originally as a mausoleum but instead used as a fortress and castle by popes. Pope Nicholas the III connected this fortress to the St. Peters Basilica in order to have easy access. Visit inside to view the many rooms, beautiful frescoes and even a torture chamber. 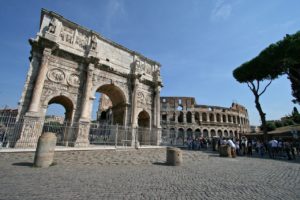 Arco di Costantino – largest triumphal arch commemorating Constantine I’s victory over Maxentius at the battle of Milvian Bridge that can be found right next to the Colosseum. Built in 315 AD, is the largest of the 3 triumphal arches that exist in Rome today. 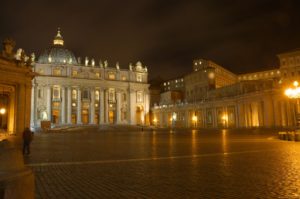 Basilica di San Pietro – Italian Renaissance church in Vatican City and the papal enclave. The second largest church in the world and runs the length of two American football fields!! Inside you will find Michelangelo’s famous sculpture “La Pietà.” You can also climb to the top of the dome if you are willing to do 491 steps! 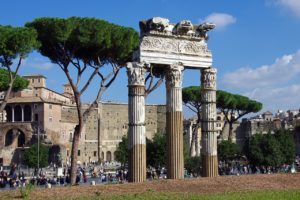 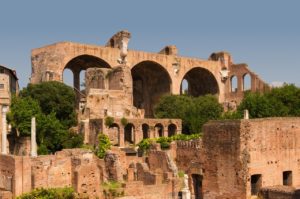 Basilica di Massenzio – Constructed in the early 4th century AD, was the largest building of the Roman forum. Most likely used for a number of things such as  council chamber, a court house and a meeting hall. Later revealed through examination, the architecture of this Basilica was influential and featured many new aspects for the time. 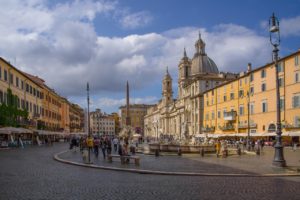 Piazza Navona – Built on the site of the Stadium of Domitian where Romans would come to watch games and competitions. Equipped with three fountains and a church, it is thought to be one of Rome’s most beautiful piazzas and has even been featured in a number of movies. 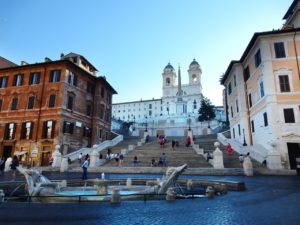 Piazza di Spagna – One of the most famous piazzas in Rome located at the bottom of the Spanish Steps (135 to be exact)!  In the middle of the piazza you will find the “Fountain of the Ugly Boat.” Given its name because the Spanish Embassy used to be just nearby.

Basilica di Porta Maggiore  – This underground basilica, that was discovered by chance, was just recently opened to the public in very small and limited times. The restoration work is still taking place currently. It has a complex structure and is absolutely impressive in the architectural world.

Temple of Bramante – considered among the first great buildings of the high renaissance and was completed in 1508. Located in the courtyard of the Church of St. Peter in Montorio, you will find this tiny temple created by the architect Bramante.

Mausoleum of Augustus – was completed in 28 BCE and at the time, was the biggest tomb in Rome. Contains the remains go Augustus, his sons and other roman emperors.

Ara Pacis – The Altar of the Augustan Peace of Rome and considered a masterpiece of sculpture. Commissioned by Emperor Augustus to commemorate his victories of Gaul and Hispanic (France and Spain).