Let me take you again at the beginning of the story... The first settlement on this bank, that is called ‘Oltrarno’, developed early in Roman age, along the Cassia Nova at the cross where converged the main roads coming from Pisa and Volterra, on the southern extremity (caput Pontis) of the bridge later called ‘Ponte Vecchio’.
On October 25th of the year 250 ‘Miniatus’ was martyred on the Mons Florentius, not away from the bridge. In 4th century here stood a proto christian cemetery and a few years later here was founded one of the ancient Florentine churches: Santa Felicita. The Oltrarno became the ‘sacred Florentine area’ after the foundation of the San Miniato church in 1018. Along the three main streets (one to east toward the Piana di Ripoli, another toward Siena and the third to west along the river) that radiated from Caput Pontis developed many villages, for the great part of inhabited by poor immigrants in search of fortune.The Oltrarno was soon endowed with fortifications. The Caput Pontis was a strategic point, it leads the roads coming from Arezzo, Rome, Siena and Pisa inside Florence. The first Oltrarno walls were never homogeneous in height, structure, materials used and, due to the ground morphology, never been a line from bank to bank. It consisted of many elements: ditches, palisades, house backs, gates and curtain walls. 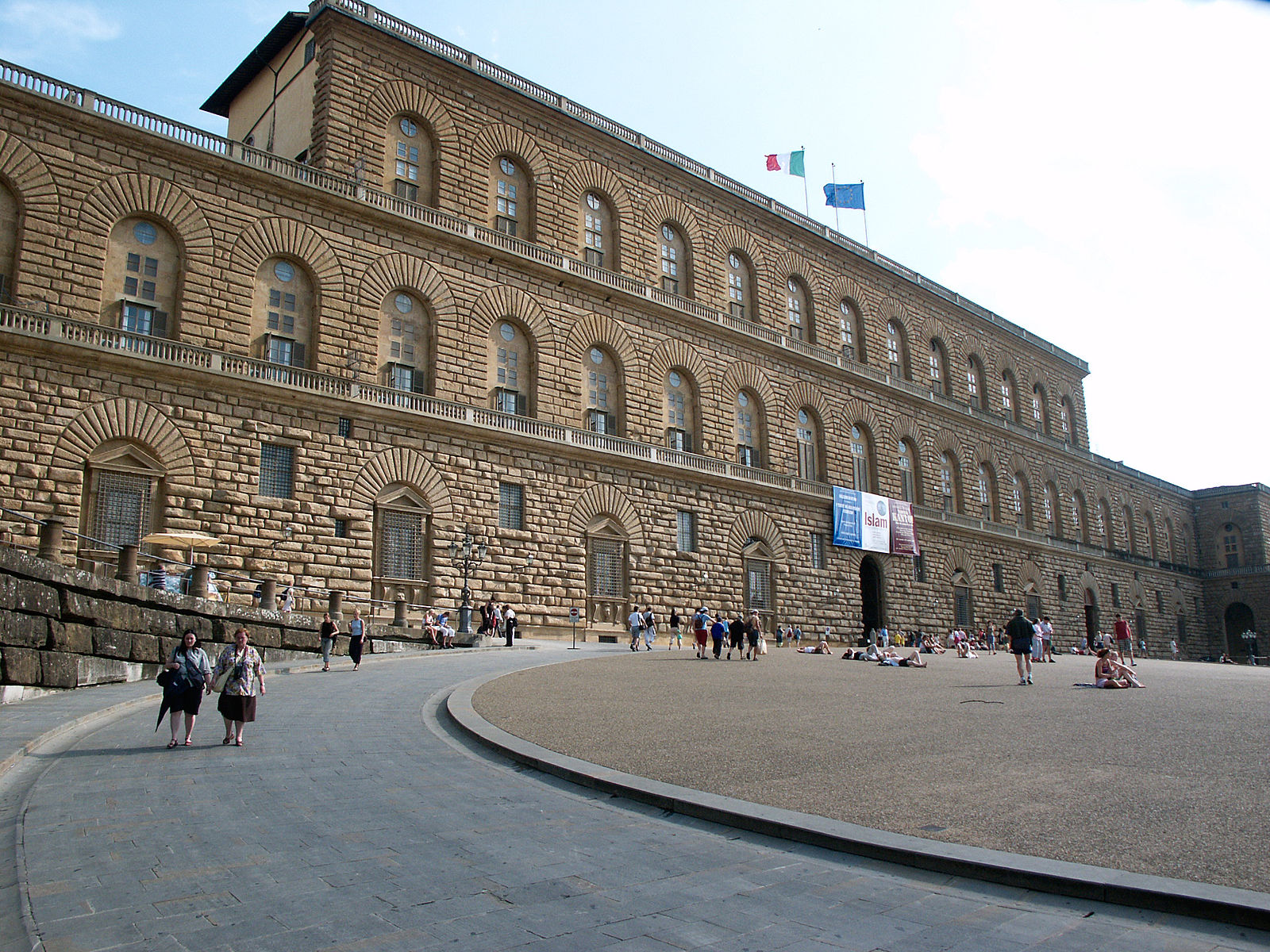 The historical chronicles are in contrast to indicate the date of the first walled defences: maybe 1078, together with the works carried on on the right bank by the Countess Matilda, or 1258. It is probable that the works of 1078 were only of earth and timber and that in 1258 was built the first stone wall. However, the formerly fortified triangle was between the present Piazza Frescobaldi, Via Maggio and Via Guicciardini.

In 1172/74 the defence perimeter was redrawn, the new line coincided more or less with the one on the opposite bank of the river, at the eastern and western level where a few years later the Ponte alla Carraia and Ponte alle Grazie were built. The eastern layout remain for great part ever unchanged, while the western have been enlarged: from the head of the future Ponte alla Carraia (Piazza Nazario) along Via de’Serragli until the corner with Via S.Agostino, along Via Mazzetta to San Felice in Piazza Church.

In 1258/59, under the Ghibelline menace coming from Pisa and Siena, with the two new over mentioned bridges already built, the Oltrarno fortification need to be reinforced. The walls were rebuilt in stone coming from the [atrocious] destruction of the Ghibelline houses and towers. The expansion of the walled circuit was great, it reached the present day Piazza del Carmine, the South Gate was erected at the cross between Via Romana and Via del Campuccio and a large area of the S.Giorgio hill was included in the perimeter. Also the great ‘Borgo’ of San Niccolò was endowed of walls and gates, included the mighty Porta San Niccolò, on the same line of the later Gate that still today is the only one that reach the original height.

The sixth enclosure built by Arnolfo di Cambio between 1284/1333 encircled a very great space on this bank of the river. The whole hill of San Giorgio and many churches like San Frediano, San Pietro in Gottolino, San Salvatore were included. Also many urban initiatives were undertaken: Via de’Serragli was prolonged, Costa San Giorgio was reinforced against landslides, Piazza Santo Spirito was enlarged and Via Maggio, Borgo San Frediano and Via di Piazza widened. However the works proceeded slow and with disorder: the Carmine, San Giorgio and San Miniato gates were built only in 1314. The new Porta San Niccolò was built between 1324 and 1327, Porta Romana (recently restored and with its wall walk again opened to the public) between 1328 and 1331, Porta San Frediano only in 1333. The fall of population, the political, economical and social crises, the floods of 1333, slowered the walls construction. In 1356 the fortifications of Oltrarno were not still completed, in the successive decade the work was carried on by the architect Taddeo Gaddi.

The urban involution freezed the city, the new invention in the military field [firearms] changed the direction for the development of the city fortifications. The year 1526 was the real turning point: Count Pierre de Navarre and Niccolò Macchiavelli decided that the crenellated curtain wall, the slender towers and battlements were no more useful: the gate and wall towers should be lowered, the defences should be entrusted by bastions between the Arno and San Miniato hill.

Great part of this works were never carried on (also the great architect Sangallo planned some of this bastions between San Miniato and Giramonte), only the gates were lowered with the exception of Porta San Niccolò, due to critics and discussions on the cost of the these constructions. In 1529 the Imperial troops of Charles 5th besieged Florence and was ordered to Michelangelo to fortify the hill of San Miniato and to construct bastions and ditches to strength the city walls.

This was the last operation on the Oltrarno’s Florence City Walls. Great part of these walls are still today in a good state of maintenance. San Niccolò, San Miniato, San Giorgio, Porta Romana, San Frediano gates are still intact, together with still crenellated line of walls and some towers, like the famous one called del ‘Candeliere’ (just under the 16th century Forte Belvedere) and the other of ‘Santa Rosa, ’near the Arno bank in San Frediano.